Monday I walked down the big hill by my house to the Mobile Public Library. I had my heart set on getting Barbarian Days by William Finnegan. Not only was it checked out, someone had put a hold on it when it’s turned in. Looking for another surfing book as an alternative, I came across Mike Rensin’s biography of Miki Dora, a surfing legend with whom I was completely unfamiliar.

After almost 200 pages, I have two contrary conclusions – 1) I’m really enjoying the book and 2) I’m not sure if it amounts to anything.

Miki Dora was a surf pioneer, a huge talent whose rebel pose, good lucks, and talent helped grow the sport. Dora fit in well with the emerging counterculture ethos of the 1950s and 60s – he rejected surf competitions, steady employment, and the professionalization of surfing. His edgy attitude made him more popular with surfing fans.

Rensin details Dora’s unique personality. He was magnetic, but detached from other people. Few knew where he lived and – despite his many girlfriends – he never married or had children. His economic circumstances were just as striking – he bragged that he never wanted to have a job (though he briefly worked from time to time). Instead of working, he sponged from friends and stole.

Through almost 200 pages, the book has held me. It’s easy to read and I’ve never been bored. Rensin deserves credit for explaining how surfing grew from a fringe past time to a major sport. Even better, he skillfully weaves Dora’s story into the bigger story of surfing.

For all of the book’s entertainment value, 2 aspects trouble me –

First, though Rensin tries hard, he can never provide a good answer as to why Dora matters. Rensin is aware of this and goes on long digressions explaining that surfing is matter of being in the moment, not leaving a legacy. While this may be true, it’s not enough justify 400+ pages of biography. Thus far, All for a Few Perfect Waves is a great escape, but (to quote Graham Greene) it’s just “an entertainment.” 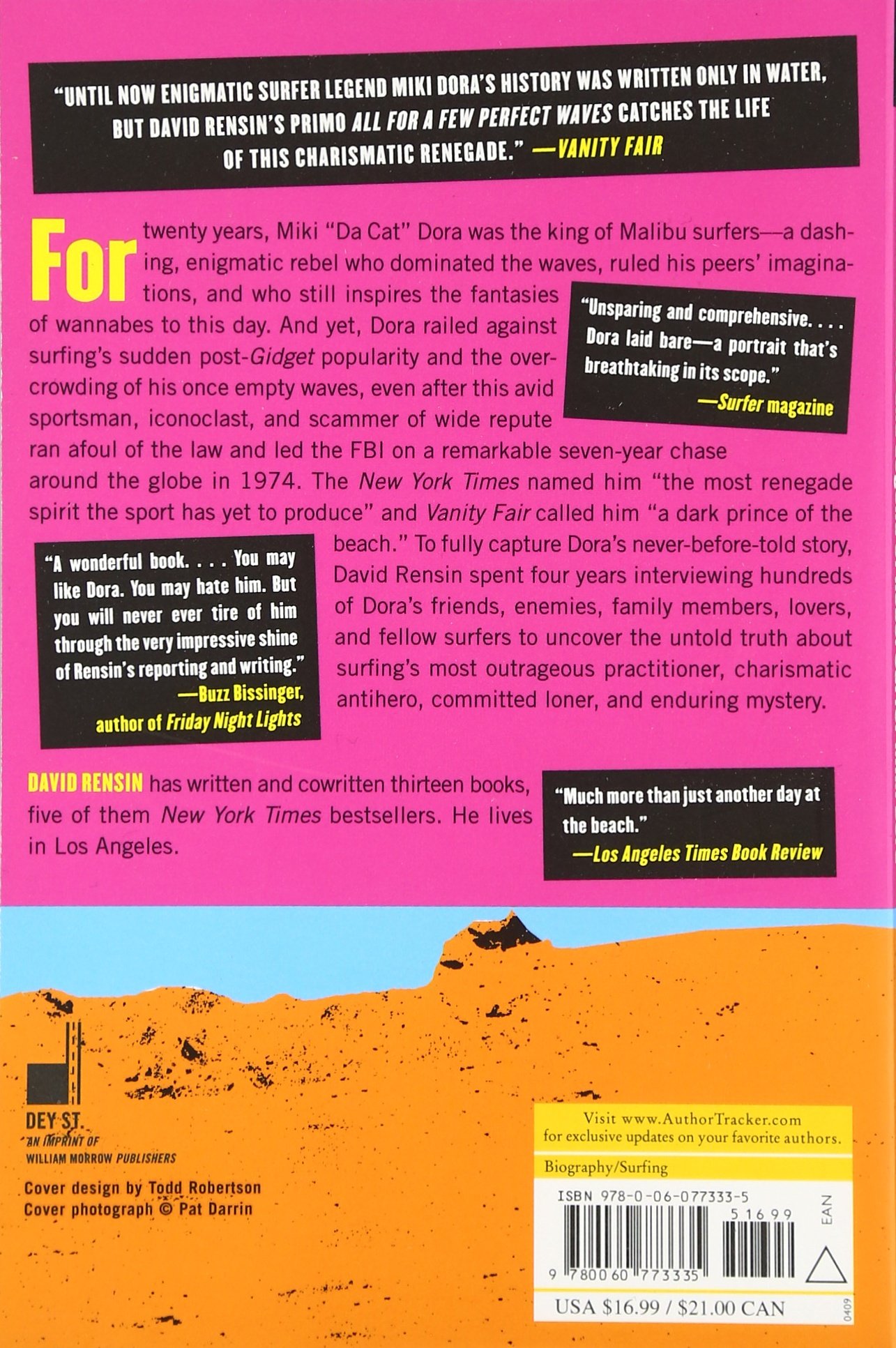 Second, thus far, Rensin doesn’t explain what drove Dora. The book provides the details of Dora’s biography, but the reader wants to know why; simply stating that Dora remains a mystery is insufficient. This second criticism is more damning to Rensin than is the first. He bears no responsibility for Dora’s “live-in-the-moment” life, but he does owe it to his readers to provide more insight.

So, after 200 pages, I’m torn. For entertainment, Waves is fantastic – a 9 out of 10. However, the reader wants better content and the unanswered questions cause me to rate the content no higher than 7 out of 10. I’ll split the difference and give it 8 out of 10 on the whole.

I have been a Mobile resident for about a decade. Working as a college professor keeps me off the streets and pays the bills. I am married to a woman (the MojoWoman) who is a much better person than I am and we have two beautiful girls who keep us both jumping. My interests are varied - food & drink, sports, politics, exercise, books, travel, Mardi Gras, and all of life's rich pageant. In the future, I'd like to learn more about sailing, photography, Cajun/Creole cooking, making beer and wine, and writing.
View all posts by mobilemojoman →
This entry was posted in Books, Sports and tagged All for a Few Perfect Waves, Barbarian Days, Graham Greene, Mike Rensin, Miki Dora, surfing, William Finnegan. Bookmark the permalink.